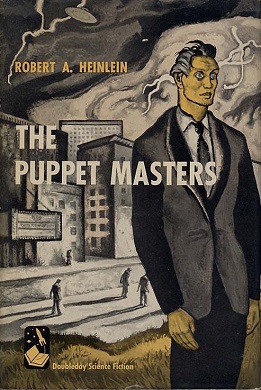 The Puppet Masters is one of those stories that gets under my skin for a couple of reasons:  first, the confusion with a much more recent series of horror movies, and second because of the obvious parallel with Invasion of the Body Snatchers.  Heinlein’s novel was published in 1951, Body Snatchers and the myriad of copies began in 1956.  The horror movie series began in the late 1980s.

I’m not sure why, but even when Heinlein’s novels get movie treatment (without being someone else’s knock off) they tend to fall flat.  This novel finally got a movie treatment in 1994, but even with a good cast, it came across as a TV movie paying homage to movies like Alien, rather than as a stand alone memorable movie.

The story itself is one of alien invasion through mind control.  The protagonist is an agent for a very secret government? agency.  If you want the cliff notes version you can rent the movie (Donald Sutherland, Eric Thal, and Julie Warner star).  It isn’t great movie making, but it does give a fairly accurate summary of the story and ideas behind the story (as opposed to Star Ship Troopers that barely kept the title intact).  The book is a good summer read although not one of my favorites from Heinlein.

Okay, this is one of several of my favorites from Heinlein.  We open with teenager Don Harvey out in the southwest desert on his horse.  His horse is startled and Don draws his pistol and shoots the nasty rattlesnake.  Old West suddenly meets the future as Don gets a cell phone call that he is being picked up by helicopter for an emergency.  It turns out that Earth is at odds with the colonized planets (particularly Venus and Mars).  Because of the potential of war, he is being recalled to Mars.

There is plenty of adventure before Don even gets off Earth, but things take a nasty turn when he gets to the relay station which has been taken over by Venerian troops.  The Venus rebels destroy the station, and Don finds himself declaring Venus citizenship and is whisked off to Venus, instead of his home on Mars.

What happens to him as he adapts to a planet he has not been on since early childhood draws out the best and worst of humankind, which is further elaborated upon in a later favorite novel, Citizen of the Galaxy… more on that on another post.

This is first and foremost another of Heinlein’s juvenile adventure stories in the arena of science fiction, but Heinlein is starting to address more complex issues.  Characters are no longer all good guys or bad guys.  But the dissonance is not carried beyond the bounds of a good story for teenagers.  Worth the read even today,

I’m not too far off the path of the total eclipse of the Sun in 10 days, living in Utah.  I debated taking the day off and driving up to Idaho, or at least buying a pair of protective glass covers for the event as we still get around 80% eclipse right here.  The challenge I’m having is ‘what’s the big deal’?  If I had nothing to do, for example the wealthy friend of Carly Simon in “You’re so Vain” singing, “Then you flew your Learjet up to Nova Scotia
To see the total eclipse of the sun.”

On the down side, it is unlikely that I’ll live long enough to see another total eclipse of the Sun so maybe I’ll really miss it if I don’t make the field trip.

There is evidence that the Chinese and the Babylonians had figured out the schedule for these events.  They were considered omens for rulers, and indeed there are a couple of notable deaths that were later associated with solar eclipses.  Mohammad’s son, Ibrahim died during such an event, and Henry I of England died shortly after an eclipse, leading to the believe by many that the solar eclipse was a very bad omen for Kings and Rulers.  It is further identified with stopping at least one war:  Herodotus reported that a a solar eclipse in 585 BC convinced the Lydians and the Medes to end their war.

Maybe North Korea and the U.S. will come to a peaceable solution to their current hostilities.

In my continuing effort to bring you some of my early Science Fiction favorites I’d like to discuss Farmer in the Sky.  Heinlein again is ahead of his time as a central theme in the first half of the book is the issue of a blended family.  The evolution of the protagonist, teenaged son, William’s feelings toward his step-sister feels real as the story proceeds.

But when you get to the bottom line, Farmer in the Sky is an adventure story for boys.  As with several of Heinlein’s early books, it started as a serial; in this case in Boy’s Life, a magazine for Boy Scouts.

The blended family moves to Ganymede, the largest moon of Jupiter.  Interestingly, 60 years later the moons of Jupiter have gained scientific interest for potentially housing life and large bodies of water, although frozen beneath the surface.

Using artificial power sources, Ganymede is now habitable, although inhospitable.  Using concepts that would certainly find home with Matt Damon in “The Martian” the small colony is eking out an existence, and actually is making progress until disaster strikes.

The story shifts significantly in the final quarter of the book as evidence of an earlier ancient, alien civilization is unearthed by the protagonist.  Heinlein repeats himself as the William is involved in the major discovery and aid to the colonists, but he is the heart not the hero of the discovery.  In several of Heinlein’s stories he focuses on the heart and soul in the protagonist, but often they have almost a Forrest Gump relationship to the bigger, often cataclysmic events in society.

Keeping in mind that this was written as a serial, and is at times a bit choppy, it is still a great read.  As a young teenager I loved the book.  As an adult, I find some of the more subtle messages more interested and still smile when I reread the book.