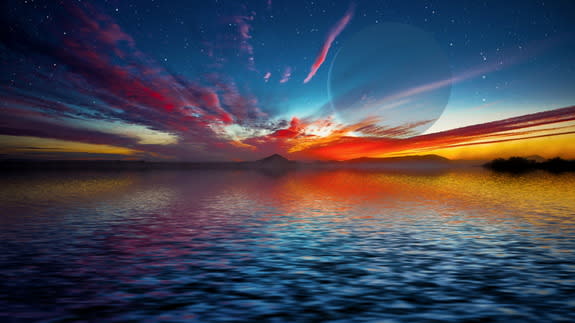 Aloha – In volume 1 of Demeter Chapter 7, we get introduced to the Sea of Demeter.  The following excerpt introduces you to the interior of Demeter.

From the side portals, they could see the sheer face of a mountain wall rising on either side of the lock. As Ryder followed the line of the jagged obsidian cliffs that rose out of sight, he saw patches of chartreuse vegetation struggling to survive on the glassy surface. The sky was difficult to read. They could not see any clouds, but it felt hazy as if twilight were approaching. It was obviously daytime for this world, but Ryder could not locate a central source of the light. As the Pegasus continued to move forward and exit the final lock, a pale aqua surface mirrored below. It wasn’t until a large creature of some sort broke the surface that they realized it was water.

“The Sea of Demeter,” Cynthia said. “Chapter thirty-three, by the way.”

“No waves. Guess surfing is out.” Randy leaned closer to the portal to look straight down.

Miss Li had quietly joined the group. “Actually, there are waves during the nightly rains, but not during the day”

Everyone jumped and turned.

“We are inside a giant geode. It has been terra formed for millennia. The whole eco-system is carefully monitored with an extensive climate control system tied to the ice fields. The ice fields are at the top of the interior, and the oceans and islands are at the bottom, at least from our perspective. It can be very confusing. When you’re in the ice fields, you think it is the other way around.”

A short hour passed as Ryder and his friends took in the water and the occasional lush green islands that they flew over. The Pegasus once again began to slow down as they approached a much larger landmass. Debbie’s voice came over the intercom and announced, “Everyone take your seat and secure your valuables. We’re reconfiguring the ship.”

Ryder barely made it back to his seat when the Pegasus began shifting and shrinking with all the compartments folding, or disappearing completely. The windows also began to disappear. He heard Joel bark, and turned in time to see him fighting to loosen his foot from a shrinking locker. Moments later they were on the ground.

Meanwhile, scientists are using computer models to describe the potential of such seas or oceans on other worlds.

For the complete articles you can visit the story at