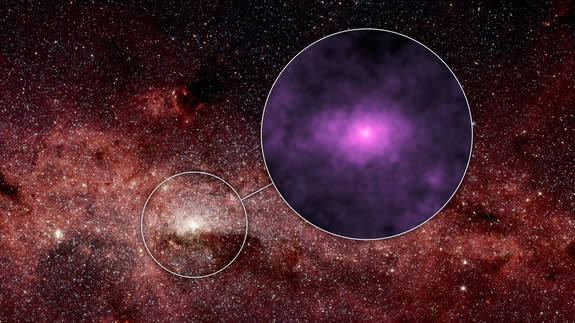 Aloha – Today’s speculation of choice is related to a theory that the center of the Milky was is hosted by a massive Black Hole, 4.3 million times the size of our son.  Thousands of star may be shrouding the Black Hole, or perhaps it is spinning at a speed almost unfathomable.

Intriguing notion.  It certainly has some merit.  After all the Milky way is clearly spinning in a manner that suggests the billions of stars are being held in a pattern by some force.

As the characters in the Demeter series do not really approach the center of the Milky Way their opinions are of limited value, but here we go:

Ryder’s view is that the Milky Way does revolve around a giant Black Hole, but he is non-commital to the size.  He is supportive of theory that whatever it’s size it is spinning at speeds to fast to capture on film.

Debbie, Ryder’s sister responded, ‘I’ve no idea how big it is, but I intend to fly there and find out.  Want to come along?

Joel and Randy just shrugged and in tandem replied, “Who cares?”

Aloha – Tired of the same old vacations?  How about a trip focused on some of the best views of the night sky in the world.  This might be a worthwhile bucket list of destinations.  For most of my readers at least one of these destinations is within reasonable access :o)  I discovered a great story on this:  “Dazzling Stargazing Destinations worth going off the grid for”

The areas on the list that I’ve been to, are a delight even without star gazing.  I have no problems planning a trip back to them.

Aloha – The next few nights will be especially fruitful for stargazers.  Jupiter will be visible as the brightest “star” in the southwestern sky in the early evenings

If you have good binoculars, or a small telescope you’ll also be able to make out Ganymede, Europa, Io, and Callisto; four of the several moons of Jupiter.

Aloha – I received three versions of the cover art for Haumeah, volume 4 of the Demeter series this morning.  I’ve asked the designer to enlarge the back cover description text, but am otherwise satisfied with the cover.

The back cover reads (in case you can’t make it out :o):

William Ryder credited with saving Demeter from an alien invasion; building an alliance with the PerSians and now determined to set the Orion Spur free from the Ten Thousand Years War.  The first step to his plan is to build an alliance with the hostile mining world of Haumeah, that also supports the second of three way-stations between the Persean and Sagittarian Arms of the Galaxy.  But before that he has to face three unexpected challenges.  Returning to Earth he has to learn how to drive a car, meet Cynthia’s father, and make a life altering decision.

What do you think?  Does it draw you in?  I expect to have to book up and available on Amazon two weeks.

In other news, the final book in the series is in editing.  I think I may be changing the title.  The anthology for the Demeter series is also awaiting editing.  But I’m also starting work on a new stand alone novel.  More about that later.  I’ll share how I’m progressing on that one as I move along.  It is nice to get back to writing after two years of editing five books lol.

Aloha – Wasn’t it just last month that a Russian analysts suggested launching a single nuclear missile at Yellowstone creating an Armageddon effect destroying the United States.  Intriguing threat.  Then this month we get news that U.S. scientists have identified a hot magma chamber below Yellowstone large enough to fill the Grand Canyon 11 times over.

Regardless of whether or not the U.S. could survive a massive explosion at Yellowstone, I’m not so sure that Salt Lake City, Utah would.  If that is the case, then I’m out of here.  I’ll call the DDF and emigrate back to Demeter permanently.

Of course Demeter has its own problems with an ongoing war between two arms of the galaxy.  It’s a tough place to be when things heat up between those two superpowers.  They make the U.S. and Russia look like infants fighting over a rattle. 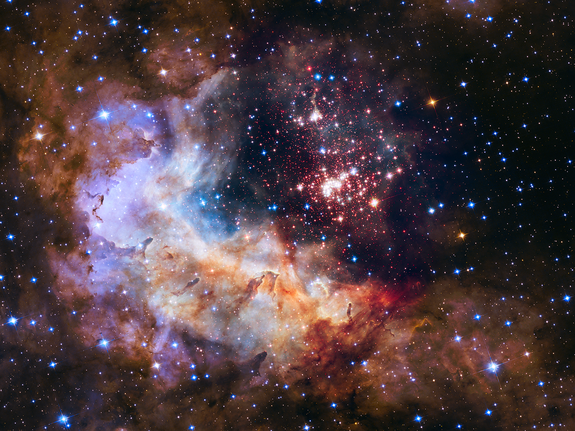 Happy Birthday Hubble.  As the Hubble Telescope celebrates it’s 25th anniversary, NASA has selected a picture of a star nursery within the Carina Constellation to celebrate.  Better than most fireworks displays I’d say.  Doc

Aloha – Another troubling report by the DDF sent back to Demeter was intercepted.  As you may know the Demeter Defense Forces have thousands of former conscriptees who served in the exo-planet, Demeter.  For well over three hundred years, returning veterans from the 10,000 years war between Sagittarians and PerSians has raged within our Orion Spur.

Efforts to curtail Russia’s space program has been successful, but now NASA is assembling a team for the sole purpose of discovering life on planets outside our own Solar System.

“The trend is disturbing and we’re not sure how much longer we can create misinformation to dissuade the people from discovering our presence.  Thirty years ago, few people believed there were planets outside our Solar System, now they have discovered over 1800 planets outside the System and it is a given that there are billions more.  Within the last three years, scientists have been convinced that there is life outside the System and now they’re determined to find it.”

The report goes on to recommend ways to disrupt the research, but they are painting a grim picture of their potential success to keep Demeter and other intelligent supporting planets a secret.